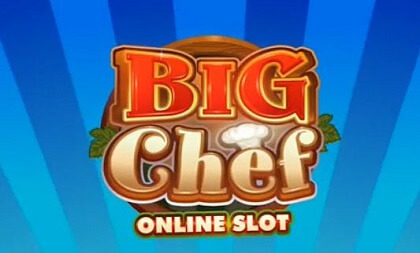 Created by Microgaming, Big Chef is an online slot with five reels and 15 paylines. The game is set in a restaurant, and includes bonus features such as a rising Wild symbol, two Scatter symbols, and a free spins round.

Providing a backdrop for the reels with their themed symbols is a restaurant menu and, behind it, a busy kitchen. The game’s graphics are bright and clear, its sound effects and soundtrack inspired by French music is amusing and engaging, and its animations flow smoothly, especially the movement of the reels and the animations that accompany certain winning combinations.

A player-friendly interface and a wide betting range mean that the game should appeal to low and high rollers.

There are three playing options available in Big Chef; namely the traditional way, the Quick Spin way, and the Autoplay way.

The traditional way is standard online casino slot gameplay, which is to set coin values, select paylines, set the number of coins per line, and select the Spin button. The Quick Spin way follows the traditional way, but sees the game played much faster than usual.

The Autoplay way uses a feature that allows players to set the game to play itself for a chosen number of spins, or until credits decrease below a certain amount or the jackpot is won.

On the Big Chef Reels

The reels of Big Chef online slot feature themed symbols. The higher value and bonus symbols include various characters and restaurant items, while the lower value symbols take the form of several of the dishes on the restaurant’s menu.

Included in the higher value and bonus symbols are the title character, a female chef, a bus boy, a waiter, a cloche, a blue menu, and the game logo. Included in the lower value symbols are soup, a crab, a roast chicken, a steak, and a dessert.

The game logo is the rising Wild, and the menu and cloche are the slot’s two Scatter symbols.

The blue menu is the first of the two Scatter symbols that appear in Big Chef. As a Scatter, the symbol can form successful combinations from anywhere on the screen.

If at least three of these symbols appear on the reels, the online slot’s free spins round will be triggered. In this round, players receive 10 free spins, and any wins made during the round will be doubled.

The cloche is the second Scatter, and it operates slightly differently to the first Scatter. This symbol is the key to a Big Chef mini-feature in the base game. If just one of these symbols land on the fifth reel, players will receive one free spin.

The Big Chef logo is the online slot’s Wild symbol. It functions as an ordinary Wild during the base game, and as a rising Wild in the free spins round.

As a Wild, it has the ability to stand in for other reel symbols, which means it can help form successful combinations. However, it cannot substitute for the two Scatter symbols.

In the Big Chef free spins round, the Wild retains this ability, but can also do more. If it appears on the reels, it will remain in position on the next spin, but also expand to the position above it. The Wild will keep doing this until it reaches the top of the reel and disappears. If the Wild fills all positions, the logo will transform into an oven.