Elvis the King Lives slot is all about Rock n Roll legend Elvis Presley. The game has an unusual layout, with three sets of reels instead of the normal one set. The eighty paylines can be played for as little as 0.40 and as high as 200 coins for all of them.

Elvis the King Lives slot is a game with a wide wagering margin, which means that players of all budgets will find a happy medium within its limits. The unique reel layout and features will attract both novice and experienced players.

Elvis the King Lives slot is not a 3D game and does not stand out in a crowd of online slots with detailed modern graphics.

All of the symbols and designs in Elvis the King Lives slot are done in 2D and look like realistic drawings. The colours are not particularly bright and there are very little animations.

The layout of the game is quite different however with the three sets of reels taking up most of the screen.

The two left most reels are 2×2 with the bigger rightmost reel being 3×6. Behind the reels is a blue stage with spotlights. The player info is all done up to look like an old school juke box to the left of all of the reels. 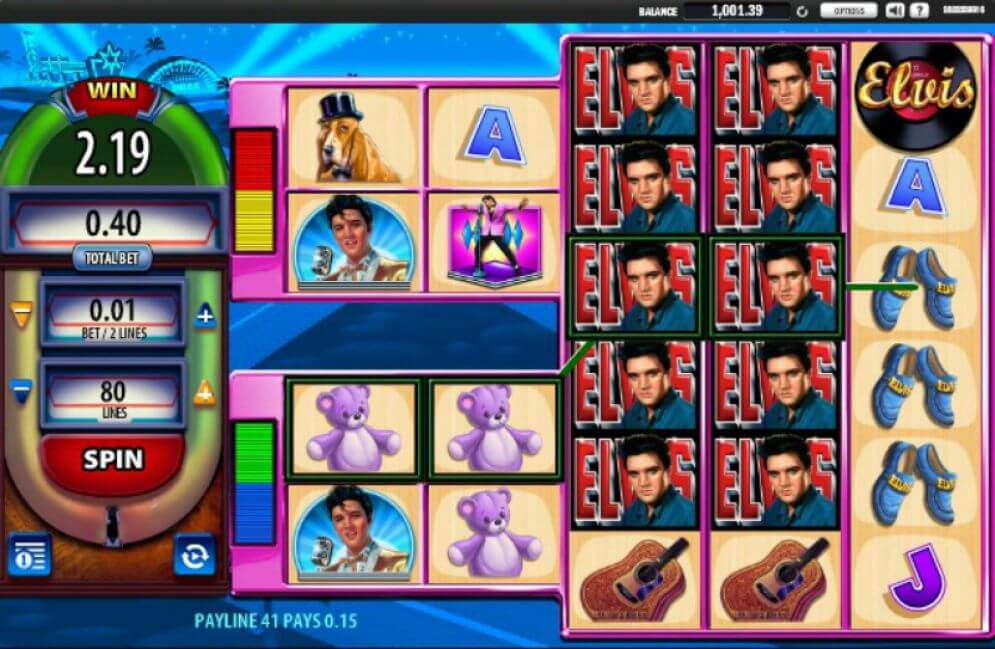 Elvis the King Lives slot is all about Elvis Presley who was known as the King of Rock. Most of the symbols in the game are based around this famous singer and his various number one hits.

The most lucrative symbols in the game are four pictures of the King himself. Two headshots will pay out 1250 coins for five of each in a row on an active payline.

Two full figure icons will award you with 750 coins for five of a kind.

Mid range symbols are all about his songs; a teddy bear, blue suede shoes, a hound dog and a guitar. Lower paying symbols are taken from a deck of poker cards and run nine though to Ace.

One of the Elvis headshots is also the wild symbol. This can be recognised by the word Elvis behind the picture.

This symbol can replace all other symbols in the game except for the record feature symbol.

The feature symbol in Elvis the King Lives slot is a picture of an old school LP or vinyl record. This is the key to the free spins which can be triggered in a number of ways.

Five free spins will be granted if you manage to find three or more feature symbols on reels nine to eleven.

Five free spins will also be unlocked if you can find four record features on reels five to eight or reels one to four.

Twenty free spins can be awarded by getting 3 vinyl symbols on reels one to four or on reels five to eight along with landing three or more Elvis Feature symbols on the larger set of reels. If you do manage to unlock all twenty free spins they will come along with a cash prize of 100 times your wager, making this one of the most exciting and potentially lucrative Australian online pokies has on offer these days.