Rendered in nostalgic pastels, the Pin Up Girls digital slots game from online and mobile developers iSoftBet is set on a lazy American beach during a 1950s summer. The scene, complete with sunbathers, surfers, wood-panelled Oldsmobile and a rollercoaster on the pier, forms a backdrop to the 5 reels displaying 3 rows, with a maximum of 9 pay lines.

The music is cheerful instrumental 50s pop, switching up to rock ‘n’ roll during the free spins rounds. The artwork, rendered in the style of the time, presents pin up bombshells and iconic archetypes of the era like roller-skates and transistor radios. Every icon displays an appropriate animation whenever it forms part of a winning pay line. As is traditional, players need to match three icons of a kind or better, in sequence and beginning on the left-most reel, to score a win on a pay line. Players have 5 options on the number of pay lines to play (the odd numbers from 1 to 9), with 5 bet-per-line options as well.

Pin Up Girls has ditched the ubiquitous poker symbols and related all its icons, low- and high-value, to the theme.

The low-value icons, which are all of equal worth, are a Pink Cadillac, a Pink Vespa, a Roller-Skate and a Transistor Radio. They each pay 3 coins, 10 coins and 30 coins for 3, 4, or 5 matches, respectively.

The higher-value icons, with a minimum win value of 5 coins, are the Pin Up Girls themselves; a Brunette, a Redhead, a Raven-haired beauty and a pert Blonde. The highest-value regular icon, a Man wearing a huge grin, pays 2,500 coins for five of a kind.

A Golden-haired Pin Up Girl with the strap of her swimsuit flirtatiously adrift is the Wild symbol, substituting for all other icons except the Scatter and Pin Up Girls Bonus symbols. If the Wild should land on the centre row in reels 2 or 4, it expands to fill the entire reel, increasing the number of potential winning pay lines for the spin. At the same time, an Expanding Wild triggers 10 free spins. An Expanding Wild during free spins also triggers another 10 free spins, so it is one of the game’s more profitable features. 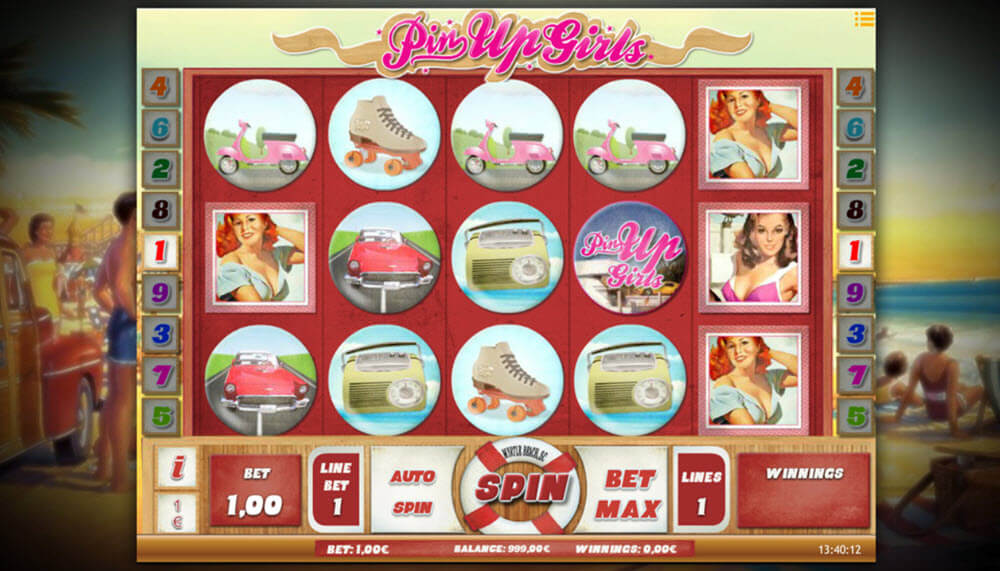 The Scatter symbol is a pouting Blonde posing in a French maid’s uniform, and Scatters in any position pay a multiplier of the total bet on the spin: from X1 for a single Scatter, up to X25 for 5 Scatters. The biggest potential win offered by Pin Up Girls, however, is the Pin Up Girls Bonus Feature. The game logo serves as the Bonus Feature icon, and 3 or more anywhere on the reels will trigger the bonus just as Aussie pokies games online has to offer. The player is given a blank wall and a selection of rolled-up posters; they must then pick the poster to be pinned up on the wall.

Different Pin Up Girl icons on the posters have different starting values, and the bonus win also increases depending on how long the poster stays on the wall; only when it falls off is the final bonus win calculated. Players can win a maximum of 225,000 coins on the Pin Up Girls Bonus Feature using https://roulettecanada.com/mastercard/.