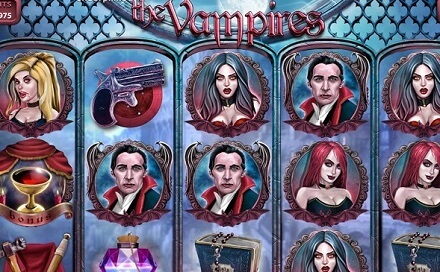 The modern fascination with the vampire story is really traceable to a single novel: Bram Stoker’s Dracula was, until recently, the proto- and stereotypical view of vampire behaviour, and Bela Lugosi’s portrayal of the character gave generations the only acceptable accent and costume for these eerie, but strangely alluring characters. While characters such as Nosferatu, and Anne Rice’s New Orleans vampires deviated slightly from the opera cloak and Slavic speech model, these carefully retained other attributes of the genre, and only recently have vampires received an updated look, to appeal to a new generation.

Endorphina’s vampire slot, however, steers clear of the sparkly stuff, and goes for the old-school favourites: set in a moon-drowned crypt, complete with creepy statues and piles of human skulls, and of course plenty of bats, The Vampires has all the bases covered. Spooky music plays throughout, and sound effects are straight from the Hollywood lot, with howling wolves and shrieking maidens, no doubt clad in diaphanous nightgowns (the maidens, not the wolves.).

The vampiric theme continues in the symbols on the reels: here you will find the Holy Water, the revolver (hopefully loaded with silver bullets, otherwise not much use against vampires), a stake and hammer, and a Bible. Following these in value are three female vampires, a blonde, brunette and a redhead, followed by Dracula himself, clad in evening dress and red of eye: 5 of his portrait in a row will net a 500x multiplier on the triggering bet.

The iconic Bat serves as the Wild symbol, able to substitute for any except the Scatter: this symbol is an action shot, as it were, depicting a young lady being bitten by a vampire. Three or more of these will trigger ten free spins, during which all winnings are trebled like in many slots on this suggested platform.

Finally, there is a third special symbol in the Goblet of Blood (or red wine, for the more pragmatic and squeamish): when three or more of these symbols are aligned on a selected pay line, it triggers a mini game, where you have to wake as many vampires as possible in the cemetery. While this is normally not a good idea, each vampire will reward you with free spins or multipliers.

The Vampires is a 25 line slot, across 5 reels: you can choose to bet from 0.01 to 5 credits per coin, per spin, making this a good option for penny slot players or those starting out, as well as offering a Free To Play option, for those looking to play risk free. Vampires does also offer a higher Risk option, whereby after a winning combination, you have the chance to cut a deck against the computer, with the higher card winning a multiplier. There is also an Auto Play option, should you wish to keep several games on the go at once.

The Vampires is a fun to play online slot, and while it may not be as rewarding as some others out there, it deserves extra mention for the way in which it follows through on the theme at every opportunity: it is a good combination of horrifying and cheesy, and is best played after dark!