It’s a truism often repeated, that we know more about the surface of the Moon than we do about the oceans of our own planet: perhaps this is because we know for certain that there are no such things as lunar sharks, but that is besides the point. Undine’s Deep takes you to explore these depths, discover exotic creatures, and with any luck, spot a mermaid, who will reward you greatly for your efforts. Endorphina games tend to follow traditional themes, often with a slight twist, but by avoiding obvious licensing overlaps, they are able to bring fresh, original artwork and ideas to these: Undine’s Deep is no exception, with a look that combines The Little Mermaid with Bioshock, while being neither.

The game plays out on a beautiful watery background, fringed with kelp, and to the sound of suitably ethereal music. The symbols are, in the lower value orders, those of the conventional playing cards, rendered in a beautiful verdigris finish. Higher than these in value are a shimmering jellyfish, a sea horse and nautilus shell, and then followed by a sea urchin and a star fish.

Highest in value is the goldfish, which makes sense, really. 5 of these across the reels will result in a 9000 coin payout, but it also functions as the Wild symbol, and can substitute for all except the Scatter: it will also add a 2x multiplier to any winning combination of which it is a part. Coin value can be set up to 5, and while Undine’s Deep offers only ten potential paylines, it does have the Gamble feature common to many Endorphina games, which allows for random wagers and large payouts. 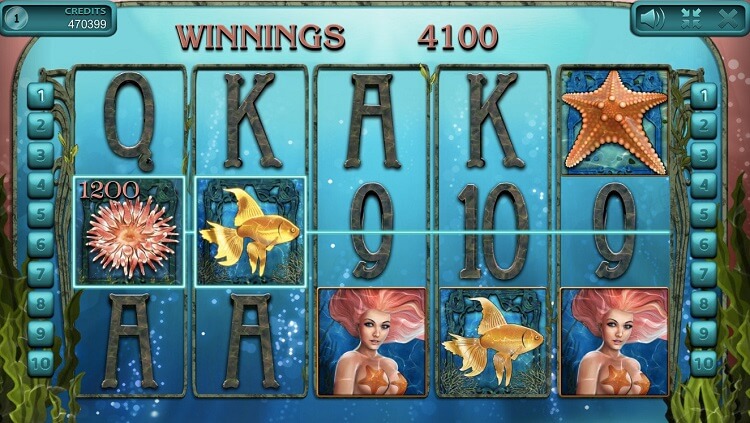 Undine’s Deep is a fairly new offering from Endorphina, and as such has a paucity of information available on it: what this does mean, however, is that it looks a lot newer, and offers more variety in its winnings than some of their previous offerings. The artwork is clean and professional, and the commitment to the theme is evident in every aspect of the game. It is worth doing some research on this one by the simplest and most enjoyable means possible: give it a spin for yourself.

The Scatter symbol of this game is the red haired mermaid: a Disney character she is not, being gorgeously rendered in quite a racy style. Not only does her appearance on multiple reels net you up to a 5000 coin payout, but it will also trigger 15 free spins, which can be retriggered, and during which a 3x multiplier comes into effect.

During normal game play, there is also the Take Risk option also found on many Endorphina games: this allows you to wager any winnings in a mini game, where you need to pick a face down card, and hope that it is of higher value than that chosen by the dealer. This can potentially double your winnings, or lose everything, so be very sure before hitting the Take Win option.